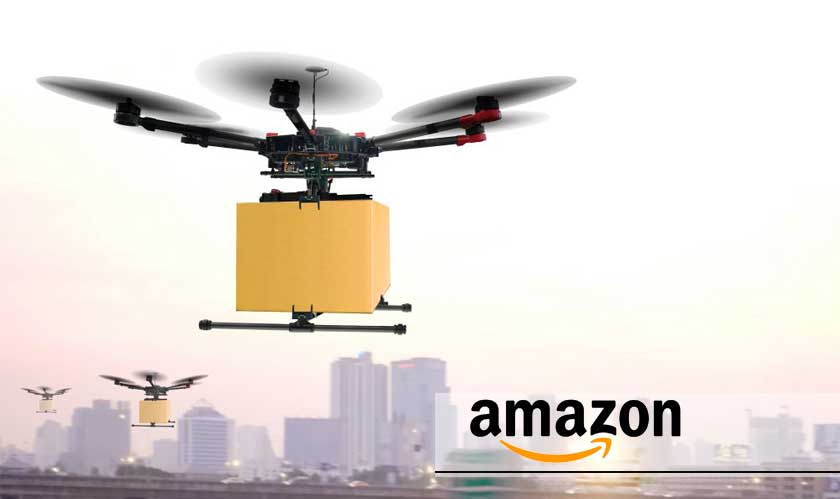 Amazon has been busy with a long wish list to fulfill. It has been listing out patent after patent for its autonomous packaging and drone deliveries. Now, a new patent from Amazon has been reported. And this one is a network of mobile workstations. These are based out on boats, tractor trailer trucks, trains or any other automobile that can be driven into areas of high demand.

The patent is straight out of the box idea consisting of a network of drones that are constantly travelling and also has intermodal delivery systems. These systems would act as both a maintenance hub and a warehouse for Amazon merchandise drone fleet. In addition, the patent also describes a standard shipping container with automated opening doors on top. There will be a vertical axis on which a retrieval apparatus, having a landing surface, will rotate and can also be raised or lowered. Sounds like it is straight out of a sci-fi.

It is these containers that can be loaded onto an automotive like a container ship or any other. In order to communicate with the drones, there would be a computer system on the automotive, along with a few maintenance cars with batteries and robotic arms and more. So basically, these maintenance cars will scoop up the drones, replace their batteries and let them fly out again. That just describes wow.

It looks like Amazon is all into making that last mile delivery its trademark success. If it can pull out this network into a reality, it will be providing immense flexibility in drone deliveries and also finding a way to automatically evaluate its drone fleet. With a mobile network constantly checking on the drones, it could mean freedom from physical facilities.