Facebook Marketplace collaborates with eBay to bring out Daily Deals

Facebook Marketplace collaborates with eBay to bring out Daily Deals 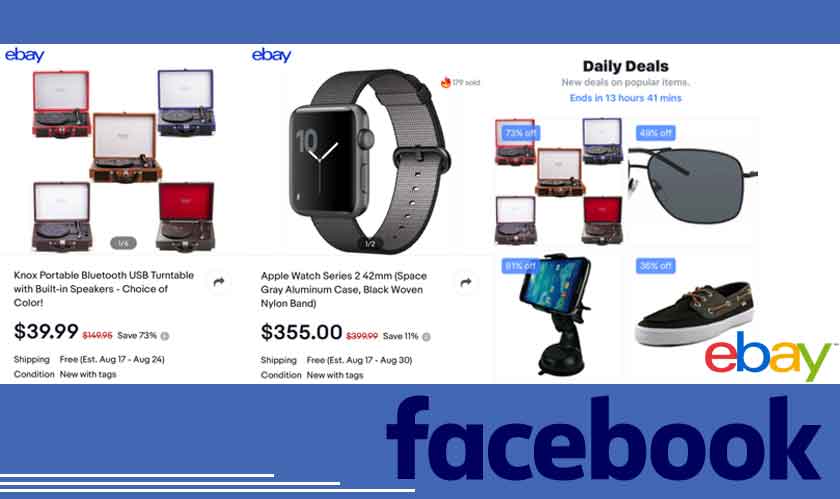 Facebook’s Marketplace has got a new feature on its mobile app. A deal between Facebook and eBay allows users to see exciting deals from eBay. Facebook has started showing Daily Deals tab for select users, directly from eBay. So basically, you can see eBay’s deals inside Facebook, but to actually check out the deals, you need to visit the eBay site.

So far, Facebook’s Marketplace has been a platform to initiate selling and buying on the social network. It had been a peer-to-peer marketplace, but with the new partnership with eBay, deals from third party websites are also going to take place. Consumer electronics, fashion, home & garden categories are going to be emphasized in the deals.

Facebook Product Manager, Akash Anand said, “We’re conducting a test to determine if people are interested in shopping for discounted products when they visit Marketplace.”

Currently, users can see the deals from eBay. However, this doesn’t mean that Facebook Marketplace will show deals from eBay alone. The arrangement with eBay isn’t exclusive. Facebook could further expand the Daily Deals to other third party deals as well.

Since this feature is still running on tests, Facebook has not made any public announcements. Like many of Facebook’s tests, it is being rolled out to selected users at first. If the users do not enjoy it or love it, Facebook may remove it altogether. However, eBay has confirmed about Daily Deals.

“At eBay, we are always looking to broaden our reach and surface inventory through new channels. We are currently running a test with a small subset of people on Facebook in the U.S. who can browse eBay’s Daily Deals on Facebook Marketplace,” said a spokesperson at eBay.